Conveyor Lifts are mechanisms that transport items vertically. They have 6 tiers, just like Conveyor Belts. They cannot be used to transport anything other than items, and items cannot be picked up from them. They can be directly connected to a belt connector on machines, such as Miners or Constructors.

Its rotation can be changed by scrolling. Use mouse movement to change its height - it can go up or down in increments of 1 meter. The minimum vertical distance is 4 meters and the maximum is 48 meters. Similar to Conveyor Belts, Conveyor Lifts can be upgraded in-place, which will return the contained items.

The building of lift always starts with its starting point and ends with its ending point.

Note: Unlike the Conveyor Belt Mk.6, Conveyor Lift Mk.6 never appeared in public builds of the game. Its existence and capacity is confirmed by translation strings.[1]

How to check if the Conveyor Lift has been connected properly. At the example below, look at the shape of the flexible connector: 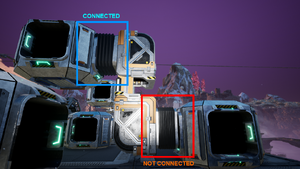